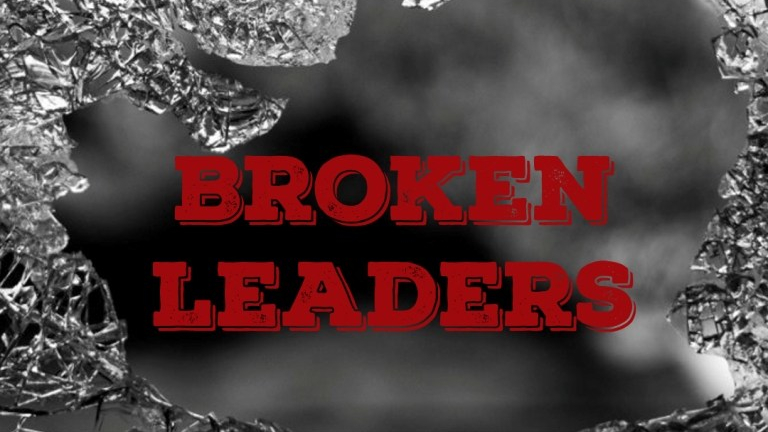 This series will examine the brokenness of both biblical and historical leaders. We will glean lessons from broken leaders both for ourselves and those around us. We will learn to lead in our brokenness.

God only uses broken leaders – men and women broken by circumstance, by life, by sin, or by God himself. King David is no exception; his life was filled with brokenness and yet God blessed David in spite of his brokenness.

David first appears on the biblical landscape in 1 Samuel 16. God had just rejected Saul as king over Israel and the Spirit of the Lord departed from Saul. He then directs Samuel to anoint a new king from among the sons of Jesse of Bethlehem. Samuel arrives and invites Jesse and his sons to consecrate themselves and come to a sacrifice Samuel will offer.

One by one Jesse’s sons appear before Samuel to see who the Lord had chosen as king. Starting with Eliab, Abinadab, and Shammah, God rejected each of Jesse’s seven oldest sons. When Samuel asked, “Are all your sons here?” Jesse responded, “There remains yet the youngest, but behold, he is keeping the sheep.” David wasn’t at the sacrifice because he was the youngest; his age made him unworthy in the sight of his family to attend. Yet, God chose him to be king.

In the next chapter, we see David rejected again because of his youth (even though he had been anointed as king). David’s older brothers marched with Israel’s armies to fight the Philistines but David was left at home. When he was sent to bring supplies to his brothers, David heard the Philistine champion, Goliath, taunt the armies of Israel. When no one else had the courage, David volunteered to fight for Israel. The king responded, “You are not able to go against this Philistine to fight with him, for you are but a youth, and he has been a man of war from his youth.” Once again, people reject David because of his youth, but God worked through his faith to deliver Israel.

A few chapters later, we see Saul descend into a jealous rage. The people praise David by saying, “Saul has struck down his thousands, and David his ten thousands.” From 1 Samuel 19 to the death of Saul in chapter 31, David is running for his life. David didn’t do anything wrong. In fact, on several occasions he acted with honor toward Saul, even sparing his life. Here we see the sin of Saul breaking David. He records his desperation in Psalm 18 and Psalm 57:

In my distress I called upon the Lord;
to my God I cried for help.
From his temple he heard my voice,
and my cry to him reached his ears.
Psalm 18:6

My soul is in the midst of lions;
I lie down amid fiery beasts—
the children of man, whose teeth are spears and arrows,
whose tongues are sharp swords.

Be exalted, O God, above the heavens!
Let your glory be over all the earth!

They set a net for my steps;
my soul was bowed down.
They dug a pit in my way,
but they have fallen into it themselves.
Psalm 57:4-6

ometimes it’s the sinful actions of others that God uses to break us. This breaking is necessary to prepare us for leadership. It helps us to develop the humility, faith, and perseverance necessary to lead others. As David acted with honor in the face of unjust persecution, his men grew to respect him even more.

David’s greatest failure is recorded in 2 Samuel 11 as he commits adultery (or rape), and murder, then orchestrates a cover-up to hide his sin. David’s lust would become his downfall. From this point his life would be marked by grief, betrayal, and heartache as the consequences of his sin played out in his family.

First, the prophet Nathan confronted David about his sin. David was broken by the conviction that he had sinned against God. In his brokenness he prayed that God would spare the life of his child. When God refuses and the child dies, David accepts the Lord’s judgement but the consequences of his sin still echo through his family.

David was a poor father, neglecting to discipline his sons. When Amnon, David’s son, raped his half-sister Tamar, David was very angry but did not carry out justice. So, years later Tamar’s brother Absalom plotted to kill Amnon out of revenge. When the deed was done Absalom fled. He later returned, planning to overthrow his father and set himself up as king.

How long, O Lord? Will you forget me forever?
How long will you hide your face from me?
How long must I take counsel in my soul
and have sorrow in my heart all the day?
How long shall my enemy be exalted over me?
Psalm 13:1-2

Sometimes the grief of life can overwhelm us as leaders. Grief caused by our sin and shame can be debilitating. It can cause us to spiral out of control in cycles of self-destructive behavior. Or, like David, in the midst of our sin and shame we can cry out to God for forgiveness and deliverance, trusting the merciful character of God to carry us through the consequences of our sin and to establish us once again. Isn’t it amazing that God can use our sin to display his mercy and grace?

A Man of Blood

Eventually, near the end of his life, David’s kingdom was restored. His son, Solomon, was named the next king. David prepared Solomon to build the temple as a house for the Lord. He wanted to build this temple himself but God wouldn’t let him. David’s greatest successes – a king who brought peace by defeating the enemies of Israel – became the very thing that prevented him from building the temple. First Chronicles 28:2-3 recounts David’s words:

Then King David rose to his feet and said: “Hear me, my brothers and my people. I had it in my heart to build a house of rest for the ark of the covenant of the Lord and for the footstool of our God, and I made preparations for building. But God said to me, ‘You may not build a house for my name, for you are a man of war and have shed blood.’”

Sometimes as leaders we feel broken because we didn’t accomplish all that we set out to do. Like David we wanted to build a temple to God, but God had other purposes in mind. Can we look back and recount God’s faithfulness? Can we be satisfied that God used us to glorify his name (sometimes in spite of us)?

David’s story doesn’t end in brokenness and neither does yours. In 2 Samuel 7 God makes an unconditional covenant with David that one of his offspring would be on his throne forever. A short summary of this promise is repeated in 1 Chronicles 17:11-14.

Centuries later, God fulfills the promise of the Davidic covenant in Jesus. The apostle Paul applies it to Jesus in Acts 13:34. In spite of all David’s brokenness – his youth, his stress, his sin, his shame, and his broken family – God used David to bless the world through Jesus!

God only uses broken leaders. He uses the people that most of us would reject. He breaks them to prepare them for leadership. He convicts them of sin to create greater dependence on him. Then he shows his glory by doing what no one thought possible – he uses the rejected things of the world to make something beautiful and precious.

Reflect on these questions:

How is God working in your brokenness to create something beautiful?
In what way is God using your pastor’s brokenness to minister to your church?
What pictures of God’s mercy and grace does your church hold in its people?